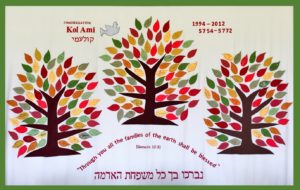 Rabbi Elliot Holin helped found Kol Ami in 1994, seeking to create a Jewish home where members could explore their beliefs, and pray, celebrate and learn together. His commitment to making each member feel noticed and important is fundamental to our sense of intimacy and community.

From then, we’ve grown from a seedling to a large and many-branched tree.